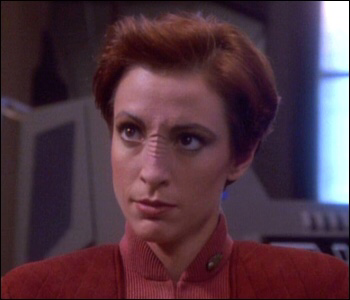 It’s been twenty-four years since Star Trek: Deep Space Nine was first aired (yikes!) and probably twenty years since I watched it. I loved that show, my favourite Star Trek series, but – as the days long before iPlayer, Netflix, etc. – I only had one shot to watch each episode so many were missed.

Finally, on Netflix, there’s the whole glorious seven series. Would it hold up? I’d already attempted to watch other Star Treks which I’d remembered enjoying (bits of) but Voyager didn’t grab me and Enterprise was too American gung ho and post 9-11 (urgh).

Well, yes it has. I’m thoroughly enjoying it. The characters are well-remembered old friends, rounded, fun, consistent, with light and dark sides. It’s got the right amount of humour. Each episode is carefully constructed and draws on and adds to the Star Trek universe. The Federation is a wonderful futuristic ideal but dramatic tension is ably provided by the Bajorans, Cardassians, Dominion as well as old favourites the Klingons and Romulans. And let’s not forget the Ferengi. Now I am as unhappy with capitalism and sexism as the next socialist leftie, but I do love profit-loving, sexist, Ferengi DS9 bar owner Quark and his speciesmen. There’s something honest and straightforward about his…dishonesty. Perhaps he’s mostly mischievous and loyal to the principles of his society. Perhaps because when push comes to shove he’ll do the right thing. Perhaps because he’s acted brilliantly by Armin Shimerman.

But really the reason I’m writing this piece is not (just) to declare my love for a well-written, well-executed TV story, but to observe how good Sci-fi is as an opportunity to delve into current values and explore new ones. Just look at the original Star Trek. The pilot had a woman commander – aired in the 1960s! – and the prime time TV series had a black woman, a Russian and a Japanese as part of the senior crew/main cast – in the 1960s! – and the first TV interracial kiss – in the 1960s! Assassinated black activist Martin Luther King was a huge fan and convinced black actress Nichelle Nichols – who played Lieutenant Uhura – to stay on the show:

“Don’t you understand what this man [Star Trek creator Gene Roddenberry] has achieved? For the first time on television, we will be seen as we should be seen every day, as intelligent, quality, beautiful people who can sing and dance, yes, but who can go into space, who can be lawyers and teachers, who can be professors — who are in this day, yet you don’t see it on television until now,’

That quote literally brings tears to my eyes. (For more on this, read this Washington Post article.)

This is why I love DS9 and am very disappointed in the backwards, toe-the-line, entertainment-lite Enterprise of the early noughties.

But in spite of its convincing stories – of the difficulties of forging peace between Bajor and Cardassia – its former Nazi-like oppressor; its pitch-perfect treatment of the co-existence of science and religion; its black commanding officer and women second in command and science officer, the Gamma Quadrant matriarchal society where men can ‘be useful but mostly just want to fight’; the woman Cardassian scientist who says that men are too emotional to be good engineers; security officer Odo calling for the attention of ‘Ladies, Gentlemen and Androgynous people’; hurrah! Men and women wear the same uniform, no short skirts for girls – its a reminder of where we were in the 1990s and what we still struggle with to this day.

Up to where I am now (end of series three), there are no gay relationships. Women have perfect made up. There’s a range of ages of actors but the age of main cast actresses (at the start of the show) finishes at mid-thirties. Irishman engineering Chef O’Brien is the only (happily) married man of the show, to a Japanese woman. Keiko is a botanist who gave up her career to follow him to DS9, whereupon she starts a school. But who always puts the replicated food on the table? Who puts their young sick child to bed even though she’s just spent hours travelling to DS9 from Bajor? It’s also assumed (uncontested) by the Chef that she will take five-year-old Molly with her on her botanist expedition into the unexplored wilds, even though it would be more logical for Molly to stay with her other parent safely on the space station.

SPOILERS *While looking up Keiko’s nationality, I noticed on Wikipedia that in a later series they covered up actress Nana Visitor’s (Major Kira) real-life pregnancy by transplanting Keiko’s foetus from her second pregnancy into Major Kira. Now perhaps they didn’t have enough time to adjust their time lines and story arcs. Or perhaps incorporating Nana’s impending motherhood into an out-of-wedlock/permanent relationship was still too much for prime time.*

Men are still the ones to make the sacrifices and women are the ones who baulk at it – O’Brien refuses to go with his wife and child when it looks like Cardassians may storm DS9 – ‘I can’t let the Cardies take the station!’ he says. ‘Let them!’ Keiko says. Doctor Bashir doesn’t think a wife and family are compatible with life in Starfleet. SPOILERS* Bajoran spiritual/statesman Vedek Bareil chooses the Bajoran peace treaty over his life, a life with his lover Major Kira. Lieutenant Dax – a female trill with many conjoined lifetimes – impulsively attempts eternity with a non-corporeal male entity and sacrifice her current happy life and career, while he ultimately feels a greater obligation to his community. And, of course, why should a non-corporeal entity be consistently male?*

Commander Sisko’s teenage son Jake and his best friend Nog, a Ferengi, argue over a double date. Jake (and the dates) are outraged when Nog tells them to be quiet and look beautiful and to cut up Nog’s food, while Nog doesn’t understand why Jake wants to chat with the girls. Jake doesn’t think they can stay friends – perhaps his dad was right, Ferengis and humans are too different to be friends. Nog and Jake make it up by promising to remember they have different values. Yes, cultural acceptance is good, but perhaps Jake could have explained how Nog could have more fun with his date by treating them as equal. After all, Nog is influenced enough by Starfleet and its values by *SPOILER* becoming the first Ferengi to apply to Starfleet Academy.

So now I’m enjoying Star Trek: Discovery, set before Captain Kirk and well over one hundred years before DS9. We follow Michael Burnham – a black woman adopted and brought up on Vulcan, reason for male name yet to be resolved (but who cares she has a ‘male’ name, right?) – she’s principled and considered Starfleet’s worst war criminal for following those principles, she has a non-skinny white woman friend (not ‘fat’, just not size zero) with an honest and quirky personality. The white male science officer is in a relationship with the black male doctor. There are lots of things to love about this. I hope there’s more to come. And not just that Michael ends up happily married, daily serving her white husband replicated food, as well as saving the Federation from the Klingons.

I’ll leave you with the words from a 2016 speech to the UK parliament by black actor and Londoner Idris Elba,

“I’m not here to talk about black people. I’m here to talk about diversity. Diversity in the modern world is more than just skin color — it’s gender, age, disability, sexual orientation, social background, and – most important of all, as far as I’m concerned — diversity of thought. Because if you have genuine diversity of thought among people making TV & film, then you won’t accidentally shut out any of the groups I just mentioned. Anyway, on the whole, I don’t think of myself as just a ‘black actor’. I’m an actor, not a number. Just like anyone else.

Remember this front page from The Sun last week?

“This is the pig’s ear Ed made of a helpless bacon sarnie. In 48 hours he could be doing this to Britain.”

What has a bacon sandwich – even a helpless one – to say about a politician’s competence to govern a country?

This cover story merely showed a flair for a clever turn of phrase, a picture that would normally be deleted by a discerning photographer and perhaps a lack of hand eye coordination.
This is not information, not news and a planet away from thinking.

Musings from muddy fields and more

A creative writing group based in Marlborough, Wiltshire UK